Local kids at the Shwedagon

After lunch we were exhausted  – not surprising as we’d woken up at about 4.30 am for our morning flight to Yangon, and then had a hectic morning touring downtown Yangon almost immediately after landing. We took a few hours off in our guesthouse, where we learned a few things.

1) Myanmar is hot, and working a/c is vital – absolutely critical in fact, at least in the time we were there. Ours didn’t work very well.

2) TV is extremely limited – most places have satellite TV  but by and large, the place where you are staying can decide what channels actually show in your room, and we found that the choice was often very limited. Myanmar TV was a waste of time for us (in Burmese), while anything vaguely resembling a kids or family channel was almost impossible to find. We found the news in English (from Asian stations, not  the BBC or CNN), the news in French, in German and in Spanish, soccer if we were lucky and happily, a movie channel, in English, which tended to be our saviour in most places.

3) Everything I had read about money was true – you have to take cash as credit cards and travelers cheques do not exist (well, this is not 100% true – we did see the JCB (Japan Credit Bureau) card accepted in a few places, but, well, only Japanese are likely to benefit from that. This is of course the result of economic sanctions by the USA and what is does achieve for sure is make life more complicated for travelers and no doubt for everyday people in Myanmar as well. Whether it makes life tough for the military rulers, well, I somehow doubt that. So, one needs to find a money changer. We were advised to make a beeline for the 3* Summit Parkview Hotel, where a very busy money changer is located in a travel agency. It was like a bank and the advice was good – we received a better rate there than anywhere else in the whole country. The rate was far better than in the Bogyoke market downtown for example.

The hotel is less than a five minute walk from the Shwedagon Pagoda.

You have to see the Shwedagon to understand it. It sounds innocuous enough – just another big Buddhist pagoda. It is anything but! Firstly, the Shwedagon is huge – it towers above anything else in the vicinity. In fact, it is very prominent from the air when you arrive in Yangon. There are various approaches – tourists often approach via escalators or an elevator, but you can walk up a few hundred stairs as well to the platform, which is more like a small town. Firstly, the area is enormous – you could probably easily fit half a million people or more in there. Secondly, there is not one place fr worship but hundreds – big and small pagodas, and tons of Buddha images. And then, in the center of it all, is this huge tower of gold, thick at the bottom and thinning out as it gets higher. The Pagoda is supposed to hold some of Buddha’s relics, and it is rumoured to be 2500 years old. It is also said to be made of 60 tons of gold, and has a huge 75 carat diamond as well as countless other jewels at the top. Nobody can actually see those jewels, but there is a photo showing them, which was taken a few years ago when the “umbrella” crowning the monument was cleaned (or perhaps replaced). The platform swarms with people but its quiet, so quiet in fact that it is almost silent. People pray silently at various spots all over. Monks sit and pray, but it is mainly everyday people asking for something that they need. It is absolutely clear that the people are intensely devout – this is just a part fo their life. All Burmese are supposed to make a pilgrimage to the Shwedagon at least once in their life – we met someone in far off Eastern Shan state who goes every year.

The Shwedagon is clearly on a par with the other great religious buildings of the world – it is a testament to faith and belief. It probably took us an hour to walk around the platform, taking in the families, businesspeople, monks, kids – all in the middle of their worshipping. As evening fell, it became magical – the Shwedagon is illuminated at night, and the light has been placed carefully to fully emphasize the brilliance of the building. As night fell, so the golden dome became more brilliant. The transition from day to night at the Shwedagon is one of the most magical experiences I have had on my travels.

The kids loved it too – they simply enjoyed walking around barefoot, watching the hundreds of rituals take place that are so different from the way we live in the West. People washing the statue symbolising the day on which they were born – astrology plays a huge role in everyday life – monks and child novice monks, people making offerings of flowers and food, incense and candle lighting, and much more. We stayed for quite a few hours – much longer than I ever dreamed was possible with kids. 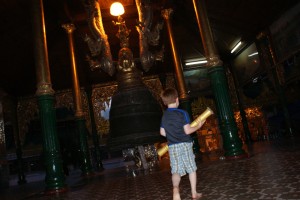 After our Shwedagon visit, we were invited out to dinner by one of the travel agencies I had been in contact with. This was totally out of the blue and unexpected and was yet another sign of the friendliness (with no strings attached) that we would eventually come to see as normal across the country. They took us to an upmarket restaurant specialising in Myanmar food and  we had a great evening. Myanmar food does not have a great reputation.  Usually described as various curries and rice, it is basically just that, except that the curries have no chillies and are quite bland. Typically cooked with lots of oil, the food isn’t for everyone, but there are restaurants in Yangon catering to tourists that cut down on the oil and this was one of them.  There are also many unusual vegetables that are used such as bitter gourd, that can be an acquired taste. This was a very good introduction to Myanmar food. Little did I know that within a few days all three kids would rebel against it!