The kids helping out in a local school

When visiting Kengtung bear in mind the following:

1) Hotel selection is tiny : there appeared to be three hotels open to foreigners. We stayed at the Princess Hotel which despite being basic was a good base for us. Gal became sick in Kengtung and the hotel staff was amazing – the manager went out and bought us antibiotics, put an extra-large screen tv into our room, made us food that we had bought outside – they were just incredible.

2) You can only visit the surrounding tribes with a guide and vehicle which can be organised in town but is best organised beforehand. It is important to note that the places you want to visit might or might not be open to tourists when you’re there. We had planned on visiting some specific areas that were simply closed to foreigners the days we were there and we had to substitute other places instead. It is a very arbitrary thing that is decided from one day to the next. Nevertheless, everywhere we visited turned out to be excellent. Be prepared to wait around 30 minutes both in the morning and the evening at the immigration office while your itinerary is sorted out every day.

3) The people in Kengtung are quite different from other parts of Myanmar – they are ethnically Thai rather than Bamar. The grocery stores reflect this, with most products coming from Thailand. One observation we made was that in general, the townspeople in Kengtung were less friendly than elsewhere in the country. This may be due to the strict security in the region and the fact that there are just so few foreigners. This is of course a huge generalization – our guides were great, the staff at the hotel were great  – but the average man in the street was less friendly than elsewhere.

4) We were amazed that in the market various currencies were accepted – Myanmar kyat, but also Chinese Yuan, Thai Baht and even old Victorian silver pieces that people still use as currency. I saw coins with Queen Victoria’s image on them dated to the 1890’s. The mountain people especially use these coins and in fact you’ll see the coins woven into their headdresses. The people here apparently have a huge distrust for Kyat, based on the fact that various paper money denominations have been arbitrarily declared valueless from time to time by the government over the past 60 years, thus wiping out people’s wealth. In Tachileik, the official currency was actually Thai Baht! 5) Kengtung really feels different from other parts of Myanmar – there is a lot of Thai TV available, Thai goods are found everywhere in the grocery stores and it simply feels less like Myanmar.

6) Weather: We were there in the monsoon – it rained every day for about an hour. Our treks were pretty muddy, and in one village we had to take time out from the rain and spent about an hour in a tiny hut with lots of locals watching us waiting for the rain to stop. They fed us continuously with what little they had – mainly corn on the cob along with non stop cups of tea. Paying a visit to a local school

7) Kid friendly: Yes, of course, like all of Myanmar. In fact, we went to see a  local soccer match in the stadium, and at half time Eitan joined the local kids playing soccer on the pitch. He was the main attraction!

8) Don’t plan on spending much time in Kengtung itself – it has a wonderful market, and a very pretty lake. But the real reason to go is to visit the surrounding countryside and visit the mountain people.

Would I recommend Kengtung – absolutely – the area is absolutely stunning in its beauty and the mountain people are completely unspoilt. The local market was the best we saw in Myanmar. But you do need extra time to really get a feel of the region and you need to be on a somewhat higher budget – its expensive to fly in and out! 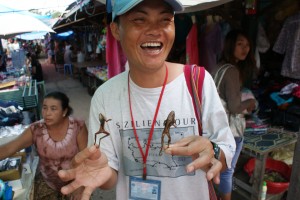 Local delicacies in the market